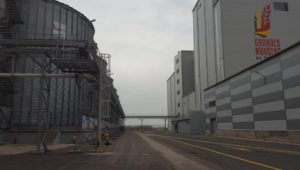 WASHINGTON, D.C., U.S. — Angola’s newly opened flour mills are expected to increase the country’s flour output along with the increased production at two existing flour mills.  Due to oil revenue loss, Angola is supporting the development of wheat milling to cut flour import costs but also to encourage economic diversification, according to a June 15 report from the Foreign Agricultural Service (FAS) of the U.S. Department of Agriculture (USDA).

Angola does not produce its own wheat and began importing it in January for milling purposes, the USDA said. The first import arrived at the Cerangola flour mill in Lobito, Benguela Province, that reopened after 10 years of inactivity.

One of Angola’s newest mills, the Grandes Moagens de Angola (GMA), processes about 1,200 tonnes of wheat per day, including 930 tonnes of flour and 260 tonnes of bran, the USDA said. The privately-owned mill is located in the Port of Luanda.

One of the GMA wheat storage units in the Port of Luanda, with a capacity of 20,000 tonnes.

With the completion of the GMA several new milling projects are expected. Within the next two years, the owners of the GMA are planning to build an additional wheat mill in the port of Lobito, on Angola’s southern coast, the USDA noted.

A second wheat mill is scheduled to open later this year, the USDA said. The mill’s starting capacity is 500 tonnes per day and it is expected to increase to 1,000 tonnes per day.

According to the report, Angola’s National Shippers Council estimated the country’s wheat flour demand is expected to hit 730,000 tonnes by 2020.

“Importers in Luanda have reported a glut of inexpensive wheat flour on the Angolan market — due in part to Turkish wheat flour subsidies of $60 per tonne — as one challenge facing wheat exports to Angola,” the USDA said. “However, the government of Angola is expected to release an updated tariff schedule within the coming months and potential wheat importers are lobbying for protective tariffs against wheat flour and in favor of wheat grain.”