Grain storages are a perfect habitat for insects since it is a protected environment that offers an unlimited und undisturbed food resource for long time spans. If wet conditions exist in the stored crop it is also a perfect habitat for fungus. Insect and fungus infestation in stored grain can result in huge economical losses, furthermore the presence of insects and their remains in crops pose a health risk to humans and other livestock.

Up till recently the only way to eliminate biological activity in stored grain was to fumigate typically using Phosphine. However, since this method has differing effectiveness on eggs, larvae and adult weevils and does not always remove the problem effectively, there is a growing problem with resistance. Additionally, the Phosphine gasses are highly toxic for humans and in many countries the level of fumigation is decreasing due to environmental safety reasons. The need for an alternative way of defeating unwanted biological life in stores crops is growing day by day, and the Ozonation seems as the simple answer. Scientific studies over the past 25 years has documented that Ozone is an effective gas to kill all forms of microbiological organisms, such as Insects, Mites, Fungus, Bacteria’s, Yeast and all other Protozoa’s.

For more than 10 years biochemist Peer Hansen, from Eye-Grain Aps in Denmark has been involved in the front line for the research on Ozonation technology, and is co-author of some of the most outstanding articles on protection of stored crops using Ozone.

In 2008 Peer Hansen initiated one of the most cited research initiatives investigating the effect of Ozone on different stages of insect, at different temperatures and different moisture content. The study involved 11 different species and a total of 50.000 insect and went on for 4 years. It was established that Ozone is a reliable alternative to traditional fumigation, determined the lethal doses of ozone needed to control adults and immatures of eleven species of stored-product pests and investigated the effect of temperature (and moisture) on the efficacy of Ozone for two species of stored-product pests.

A series of laboratory tests and field studies spanning more than 10 years, have led to the final design of 2 series of Ozonator machines which were being presented at the VICTAM show in Bangkok in 2016; and Eye-Grain Aps won the Innovation Award 2016 for introducing the new Ozone treatment technology. Compared to traditional fumigation Ozonation has many advantages; Ozonation is:

Ozonation Machines are practically available to control unwanted biologic activity in stored crops. This technology now makes it possible for flour mills, feed mills, and any grain storage facility to efficiently combat all types of infestation with a 100% termination result.

The Crop-Protector Ozonator Machines are being produced at the factory in Copenhagen, Denmark. 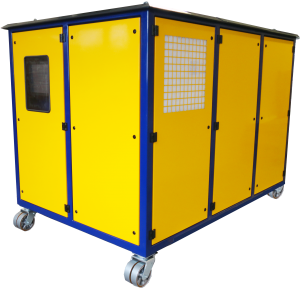