February 13, 2017, Food Business Africa, RWANDA – Grain and cereal farmers in the country have got a new lease of life following the coming on line of a multimillion processing plant Thursday.

According to officials, the fortified foods factory will provide ready market for more than 10,000 large and small-scale grain and cereal farmers across the country. 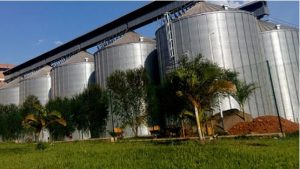 Based in the Kigali Special Economic Zone in Nyandungu, Africa Improved Foods Rwanda, launched the production of fortified porridge flour last Thursday, opening a window for sustainable market opportunity for over 10,000 maize and soya bean farmers across the country, according to Prosper Ndayiragije, the firm’s country director.

The plant has an annual production capacity of 45,000 tonnes, he added. The development has excited farmers, saying such initiatives assure them of sustainable market, which is crucial for them to increase production. The agriculture ministry signed a deal with the firm, where a number of farmer co-operatives were identified to feed the factory.

Presently, more than 200 farmers co-operatives are benefiting from the project and Ndayiragije said the firm will bring on board more farmers and co-operatives.

The ministry distributes inputs to farmers, including fertilisers and quality seeds to ensure increased production and steady supply of raw materials.

These products will be formulated to complement the dietary requirements of pregnant and breastfeeding women, older infant children above six months, according to the firm.

“There is no reason why farmers will not increase production given the ready market the factory provides,” said Florence Umuraza, a maize farmer in Muhanga District.

Francis Muhire, another farmer in Burera District, said the new facility gives confidence to farmers but urged government to invest more in rural infrastructure “so that farmers can easily access markets”.

“This (new fortified foods factory) is good news for farmers, but we still have a challenge of poor transport network. Therefore, we urge government to address the problem for us to easily delivery our produce to the market,” he said.

Last month, the Ministry of Trade, Industry and EAC Affairs revised the prices of maize upwards to Rwf200 per kilo, from Rwf160.

Maize production is projected to increase to at least 781,000 tonnes in the first season of 2017, up from less than 652,000 during the same period last year. Production of soya beans will be over 539,000 tonnes, according to the ministry.

This could further increase because of the reassurances farmers are getting from the new plant’s manager, said Emmanuel Kayiranga, the chairperson of post-harvest handling and storage taskforce.

Kayiranga is also the head of the national strategic reserve at the Ministry of Agriculture.

In 2015, government entered into a venture deal with Africa Improved Foods (AIF) to boost production of fortified in the country.

The venture, Africa Improved Foods, is a consortium created by the global Life Sciences and Materials Sciences Company, Royal DSM, the Dutch Development Bank, and the UK’s Development Finance Institution, DFID, under the Impact Acceleration Facility managed by CDC Group, and the International Finance Corporation, the investment arm of the World Bank.

The Minister for Agriculture and Animal Resources, Dr Geraldine Mukeshimana, said at the time that the project would help create more than 230 jobs along the supply value chain and boost nutrition in the country.

To operate at full capacity, the factory will need steady supply of soya bean and maize, which the firm intends to source locally, or from the East Africa region.

However, the is presently getting less than 10 per cent of the needed soya and maize produce locally, while the rest is imported mainly from Uganda.

Other ingredients, including skimmed milk powder and other food nutrients, will be imported from South Africa.

Local sourcing of raw materials is still a big challenge facing the country’s manufacturing industry, according sector players. This affects the pricing of the final commodity making them almost out of reach for many Rwandans.

They said many factories do not operate at full capacity because of shortage of raw materials or inadequate power supply.

About 370,124 tonnes of maize were produced in the country in 2015, according to figures from the agriculture ministry.

The Rwanda Agriculture Board (RAB) estimates that the country’s produces at about 35,000 tonnes of soya per year.

In 2015, production at Mount Meru Soyco, an agribusiness plant based in Kayonza, almost came to a standstill due to shortage of raw materials.

The firm’s soya cooking oil factory has a crunching capacity of 45,000 tonnes of soya beans per year.

The factory needed almost 200 tonnes of soya per day to operate at its installed production capacity, but farmers could not raise the cereals.

Because of such produce shortages, Rwanda is forced to imports about 30,000 tonnes of cooking oil (the main soya product) worth $42 million annually to satisfy demand, RAB figures indicate.

Now with more players entering the market, the onus is on RAB and other stakeholders, as well as local and civil leaders to create awareness about the huge market these projects present farmers so that they increase grain and cereal production to feed the factories.

Lack of market is always one of the farmer morale dampeners, so maize and soya farmers should be encouraged to take advantage of these ventures increase acreage and be able to realise high yields and improve their income and standards of living.

Rwanda’s agriculture sector is projected to grow at 8.5 per cent per year from current 6.5 per cent.

According to the National Institute of Statistics of Rwanda, the agriculture sector grew by one per cent during the third quarter of 2016 and contributed 0.4 percentage points to the country’s total GDP growth.

The sector was the third biggest driver of growth over the reporting period.